Delegate your stake to build the network, earn rewards, and become part of the Cardano journey. Minimum stake is 10 ADA. Rewards will start appearing in your wallet 15-20 days after you begin staking. By holding and staking Ada tokens, you will assist the Cardano network with processing transactions and validating blocks on the protocol and receive a return on your investment.

When you stake your ADA tokens, they will never leave your wallet

Our variable fee is and always will be 0% - allowing us to maximise returns for you, our delegators, whilst developing and maintaining a secure and reliable network. 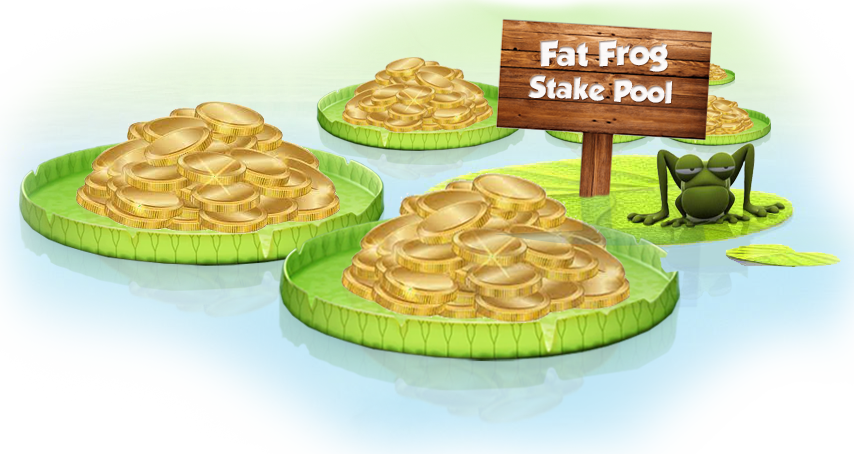 If your wallet supports staking, open the Delegation Centre in your wallet and search for Fat Frog Stake Pool. Our ticker is FFR.

When you initially stake your Ada with Fat Frog, you will need to wait 15-20 days before being eligible for a reward payout from our pool. If you have staked before, and are moving your stake to our pool, you will continue to receive reward payouts from the pool you previously staked to during this time.

How are rewards calculated?

At the end of each epoch, all pools that have minted at least one block during the epoch are eligible for rewards. Stake rewards are calculated and are distributed amongst the pool operator and the pool delegators. This happens in several steps:

If you'd like to calculate how much you can earn from staking ada, visit: Cardano rewards Calculator

Stake pools are run by stake pool operators. These are network participants with the skills to reliably ensure consistent uptime of a node, which is essential in ensuring the success of the Ouroboros protocol and the Cardano network as a whole.

The protocol uses a probabilistic mechanism to select a leader for each slot, who will be expected to create the next block in the chain. The chance of a stake pool node being selected as slot leader increases proportionately to the amount of stake delegated to that node. Each time a stake pool node is selected as a slot leader and successfully creates a block, it receives a reward, which is shared with the pool proportionate to the amount each member has delegated. Stake pool operators can deduct their running costs from the awarded ada, as well as specify a profit margin for providing the service.

Ada held on the Cardano network represents a stake in the network, with the size of the stake proportional to the amount of ada held. The ability to delegate or pledge a stake is fundamental to how Cardano works.

There are two ways an ada holder can earn rewards: by delegating their stake to a stake pool run by someone else, or running their own stake pool. The amount of stake delegated to a given stake pool is the primary way the Ouroboros protocol chooses who should add the next block to the blockchain, and receive a monetary reward for doing so.

The more stake is delegated to a stake pool (up to a certain point), the more likely it is to make the next block – and the rewards are shared between everyone who delegated their stake to that stake pool.

Delegation is the process by which ada holders delegate the stake associated with their ada to a stake pool. It allows ada holders that do not have the skills or desire to run a node to participate in the network and be rewarded in proportion to the amount of stake delegated.

Yes. Delegated stake can be re-delegated to another pool at any time. Re-delegated stake will remain in the current pool until the epoch after next (from the point of re-delegation), after which your delegation preferences will be updated on the chain and your stake moved to the new stake pool. Rewards are distributed from the end of each epoch, so you’ll continue to receive rewards from your original stake pool for two epochs before your new delegation preferences are applied.

It depends on the wallet...

The short answer is no. Over time, the rewards should be roughly the same... and may even be better!

Some people overlook small stake pools as they think they wont get any returns from them or they will get less rewards than some of the bigger pools.

At present, a pool needs at least 4.5M Ada staked to consistantly mint blocks each Epoch and earn rewards. A pool with less staked Ada will mint blocks less frequently.

However - a pool with a large stake has a large number of delegators, so the rewards are smaller because they are split amongst many delegators. Small pools mint fewer blocks and have fewer reward payouts, but because there are far fewer delegators, each delegator earns a much higher reward each time a block is minted.

Over time the rewards even out. The key is to pick a pool and stay with it - unless they are minting zero blocks.

Saturation is a term used to indicate that a particular stake pool has more stake delegated to it than is ideal for the network, and once a pool reaches the point of saturation it will offer diminishing rewards. The saturation mechanism was designed to prevent centralization by encouraging delegators to delegate to different stake pools, and operators to set up alternative pools so that they can continue earning maximum rewards. Saturation, therefore, exists to preserve the interests of both ada holders delegating their stake and stake pool operators.

The goal is to avoid any single pool becoming too large – thereby disincentivizing delegation to other pools – and receiving a disproportionate amount of the rewards. The health of the network is partly determined by having a high number of active stake pools with a balanced amount of stake delegated to them. The more numerous and geographically diverse the network’s pools, the better.

You can use the rewards calculator to get an idea of how much you will earn in rewards. It’s important to note that the calculator produces only reward estimates and shouldn’t be considered definitive or a guarantee of reward amounts. In the future, we will likely test different parameters that may affect reward margins. Amounts calculated are therefore subject to change, but represent a realistic and sensible level of return.

Yes. Rewards earned accrue with your original stake. When rewards are received, the balance of your reward account increases – and, consequently, the delegated stake is increased.